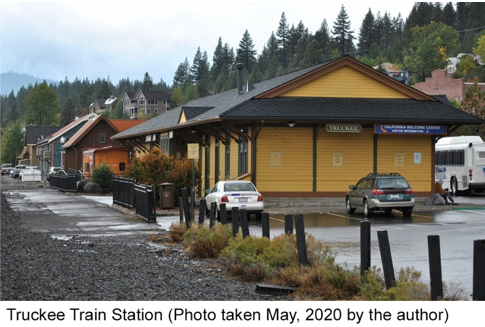 The Truckee Depot is an iconic structure in downtown Truckee.  It was placed on the California List of Historic Landmarks in 1976.  But few know of its long history.  Nor that it is not the first train station in Truckee.

The first passenger depot was built just west of the present depot, but on the south side of the tracks.  Shortly after the completion of the Transcontinental Railroad in 1869, the passenger depot and ticket office moved to the ground floor of J. F. Moody’s Truckee Hotel, which was just east of the present depot on the south side of the tracks.  This arrangement between private businesses and the Southern Pacific Railroad (SP) was quite common.  The Truckee Hotel also operated daily stage coaches to Donner Lake, Tahoe City and Sierra Valley.  The hotel was widely advertised as a luxury accommodation and was visited by several U.S. presidents, including Ulysses Grant and Rutherford Hayes.  The Truckee Hotel, with the passenger depot, burned down in the early spring of 1900 and during the summer of 1900 the present structure was built.  To this day the Truckee Depot is one of the few depots of its type remaining in use as a depot in California.
The design is SP’s standard One Story Combination Depot No. 23.  The structure has not been modified except for minor changes in the roof when the railroad ceased using the semaphore signal system.  It is still the original 25 feet wide by 146 feet long.  The only change is that the original color of the outside was changed to a light-green with white trim in the late 1960s.  The Truckee Depot housed the district railmaster’s office and functioned as a ticket office until the beginning of the Amtrak era in the 1970’s.  Beginning May 1, 1900 the Lake Tahoe Railway and Transportation Company (LTR&TC) ran narrow gauge trains between Truckee and Tahoe City on the north shore of Lake Tahoe.  SP purchased the LTR&TC and converted it to standard gauge in 1926.  From May 1900 until November 1943, the depot also served as the ticket office for the LTR&TC and SP trains.

In 1985 the station was sold to Nevada County and remodeled into the present-day Transportation Center for Amtrak, Greyhound, Tahoe Area Regional Transport and Truckee Public buses.  The outside colors were returned to the original yellow with green trim.
However, the interior has been radically redesigned.  Walls were moved or removed to accommodate the Visitor Information and Chamber of Commerce room, a local history museum, retail areas, restrooms and a small waiting room containing an historic safe.  Today, tickets and train information can only be obtained online, not at the station.  However, the waiting area is available during the day for passengers waiting for the California Zephyr trains.  Presently, the California Zephyr trains (Amtrak) stop at Truckee, Train No. 5, west bound Mo-We-Fr at ~9:37 a.m. and Train No. 6, east bound Tu-Th-Sa at ~2:30 p.m.

*About the Author:
Ed Czerwinski is a member of the Truckee Donner Railroad Society and resides in Tahoe Donner.