While a number of United States Presidents have visited the Lake Tahoe area, there are only a few that actually have visited Truckee.  One of our eagle eye researchers happened upon an image of President Theodore Roosevelt – of all places on a flickr site.  So we thought in honor of upcoming President’s Day, we would include this photo of Teddy Roosevelt.  Further, we unearthed the President’s actual speech that day given from the train as it was being prepared for continued travel. Invitations to the public were published in the local Truckee Republican newspaper encouraging residents to come out to see the President. 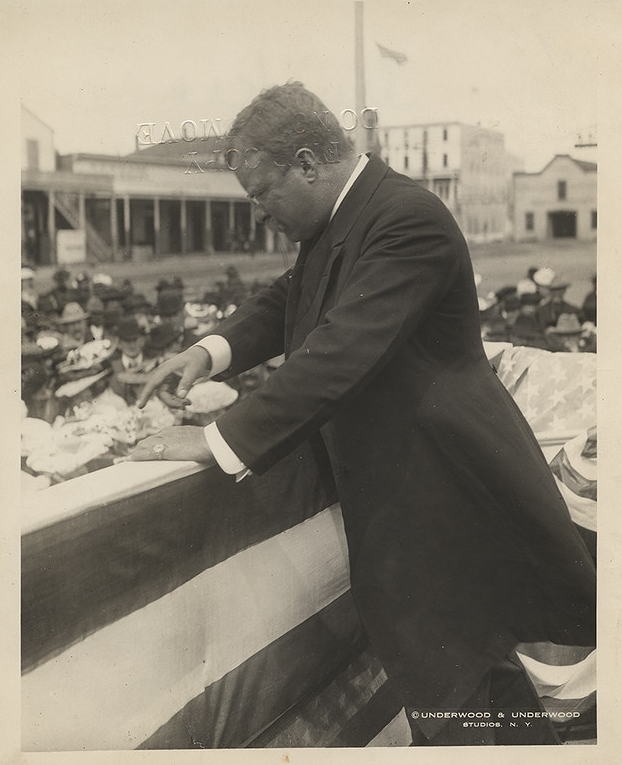 Photo courtesy of DeGolyer Library, Southern Methodist University, Doris A. and Lawrence H. Budner Collection on Theodore Roosevelt. Used with written permission. Jan. 2020.
We also discovered some publications that wrote about Presidential visits that you might find interesting.  Former TDHS President Gordon Richards wrote an article October 20, 2005, “Roosevelt’s ride into Truckee was a memorable one” and recounts the reason why Roosevelt’s train stopped here.  He explained that the only reliable and safe transportation for any President at that time was a special train on the Southern Pacific Railroad.  More often than not, most Presidential trains sped through most towns without blinking, but the Truckee stop was more of a logistical railroad stop to permit locomotive changing, safety inspections, orders, water and coal.  The stop in Truckee was originally scheduled to be nothing more than a “whistle stop” while the train was being turned.  However, advance notice in the local paper encouraging residents to come out to see the President brought one of the "largest gatherings of people ever assembled in Truckee".  Instead of just speaking from the rear of the stopped train, Roosevelt was entreated to speak to the large assembled crowd from a nearby platform.  He spoke for over 20 minutes – much longer than originally scheduled.

An exuberant article from the May 20, 1903 San Francisco Call recounts the President’s arrival and speech.

And how do we KNOW for sure that this Roosevelt image IS really from Truckee?  Compare the image above with many of these images in our TDHS Image Collection.  The building in the above image in the top right was the old 1889 Truckee Livery & Stable building, and the building on the left was the Whitney Hotel (in 2020 it is called the Truckee Hotel).  Take a peek and convince yourself.  (BCS0012; FTS0052; TRR0080; CMR0031; CMR0043; BCS0013; CMR0019; FTS0025; ICP0020.)  And we are also very fortunate that we have an image of the actual Presidential Train.

While President McKinley also briefly stopped in Truckee in May 1901, his stop was not nearly as lengthy as Roosevelt’s.  Noted local Tahoe historian Mark McLaughlin also recounts which Presidents stopped in the Lake Tahoe area. Part I, September 24, 2015.  Part II, September 30, 2015.  Eerily, he also recounts that:

For most of its existence, Truckee has been a small town in mountain country. It has always been, however, a stop along the transcontinental railroad. In the 19th Century, before the advent of automobiles, politicians traveled by train or by stagecoach if they had to. Historical presidential visits to Truckee include Ulysses S. Grant, Rutherford B. Hayes, Theodore Roosevelt, Chester A. Garfield, Grover Cleveland and William McKinley. In a strange twist of fate, of the four American presidents who have been assassinated, three had visited Truckee.

So the next time you’re in old town Truckee, along Commercial Row at the Train Depot, think back some 97 years and see if you can hear the train whistle inviting you to captively listen to Roosevelt’s speech.
HCS/CM/RR 01/31/2020