HCS 6/18/2021
The Truckee Hotel - Surviving the Times
By Judy DePuy
This article started as an overview of the Truckee Hotel but I realized that the story was much bigger than that. It is about Truckee being a Historic Mountain Town that has been able to adapt and survive.
The original “Truckee Hotel” was located across Commercial Row/Front Street on the other side of the railroad tracks near today’s Truckee Diner (Jax). When the hotel burnt down in 1900 the proprietors did not want to have the train master station in the same building as the hotel (Note: Central Pacific owned the land and it was required by the lease to have the train station office in the hotel. Visit the new Museum of Truckee History in the train depot to see what the Train Master office would have looked like).
The Bridge Street land section, on the east between Front and Church streets appears to have had hotels since the early years of Truckee’s history. It is difficult to figure out which of the earlier structures are still part of the current Truckee Hotel but we do know that the first record of a hotel opening on this spot was on August 27, 1873 and was called the American House. The hotel supported guests who frequented the numerous saloons on Front Street (now Donner Pass Road) as well as the red-light district’s dance halls and boarding houses on Jibboom Street.
The hotel changed hands numerous times. In 1875 Stuart McKay purchased the hotel for $2,364.71. McKay did an extensive remodel in 1877 turning it into a three story building. The hotel was very successful as inexpensive accommodations where he charged $6 per week for board and lodging and meals were $0.25. In March 1878 the hotel burned in the Bridge Street fire. McKay rebuilt the hotel and called it the Pacific House.
The current four-story Italianate hotel was built in c. 1889 and was named the Whitney House after its new owner, Thomas Whitney. The Whitney House was also a stage coach stop during the 19th century. A devastating fire gutted most of the hotel on August 15, 1909. Whitney luckily had enough lumber on-site to rebuild the hotel immediately and renamed it to the New Whitney House. It boasted electric lights, hot and cold running water, and steam heat. Whitney even had Truckee’s first billboard painted on a massive granite rock next to the Dutch Flat – Donner Lake Wagon Road near Donner Summit advertising his hotel. After over 100 years the sign is still visible.

During the combined railroad and automobile heyday of the 1920s, Truckee had approximately 1,380 residents with 287 of these individuals listed as “boarders” or “lodgers” where they stayed in hotels, boarding houses or rented rooms in private homes.
Mrs. Minnie Coleman and Mrs. Ruth Notley bought the hotel on October 12, 1944. It was then called the Riverside Hotel where Bill Notley, great-grandson of Coleman, lived as a boy. The hotel was also a Greyhound bus depot. Bill remembers when the City of San Francisco train was stranded on Donner Summit due to an avalanche in 1952. Many of the passengers, once they were rescued, stayed at the Riverside. Bill still has the front desk bell that was used to get hotel staff’s attention when guests arrived.
Mary Anne Boice had her real estate office in a lean-to next to the hotel and wanted to expand her office and place it in the ground floor of the hotel. In 1977 Boice and Stefanie Olivieri/Erber and Adolf Erber bought the hotel and once again did extensive work restoring the hotel to what it looked like in the late 1800s as the Old Whitney Hotel. Stefanie wanted to keep the hotels historic charm and bought out Boice renaming the hotel the Truckee Hotel. The hotel reopened in November 1977 with the old radiators and sinks still in the rooms. She also remembers a couple that had moved into the bridal suite for their honeymoon (shortly after she had completed the major remodels) where they had left the water running in the bathtub. The ceiling collapsed onto a party of 12 people eating in the restaurant, covering them in water and plaster. On another occasion, after they had put period furniture in the rooms, a select group of guests left in the middle of the night taking everything that was not nailed down.
The hotel has been able to keep its name since 1977. When asked “Why did this hotel survive?” everyone has said “location, location, location”. The hotel was a hub for travelers coming in on the train and was conveniently situated within easy walking distance. Hotels and lodging establishments were vital places for individuals to live and vacation, offering weekly and monthly deals that included both a warm bed and a meal in a community dining hall. The site/building has been used as a hotel and as a restaurant for over 145 years.
In 2012 the hotel went through another series of renovations. The current proprietors of the Truckee Hotel (Truckee Hotel Partners LLC, a small group of investors from across the state) had to close its doors on March 16, 2020 due to the COVID-19 pandemic. To stay afloat, Moody’s restaurant on the ground floor took to-go food orders and expanded to the street. Currently eight rooms have a private bath with the remaining 28 rooms sharing bathroom facilities.
Many mountain towns have disappeared into obscurity, however the tenacity of the Truckee community’s residents has fostered an environment to encourage rebuilding and reinventing to keep Truckee alive. The Truckee Hotel is a great example of how Truckee has kept to its roots and stayed relevant. Much of the hotel retains its original charm with the large mirror in the lobby that survived the 1909 fire and the stairwell that leads to its period bedrooms.
MANY NAMES
The current Truckee Hotel site has had several names including:
American House (1873-1878)
The Pacific House (1880-1882)
The American Hotel (1885-1886)
The Whitney House (1887-1909)
The New Whitney House (1909-1918)
Blume Hotel (1920s-1933)
Riverside Hotel (1934-1943)
Alpine Riverside Hotel (1956-1977)
The Truckee Hotel (1977 to today) 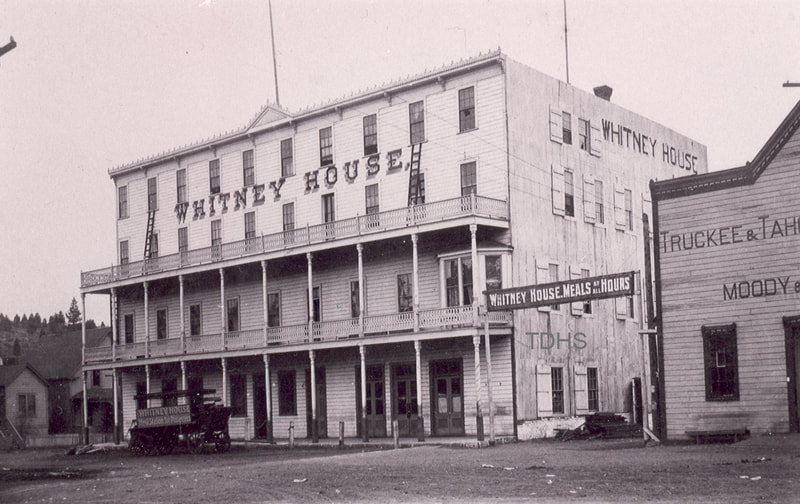 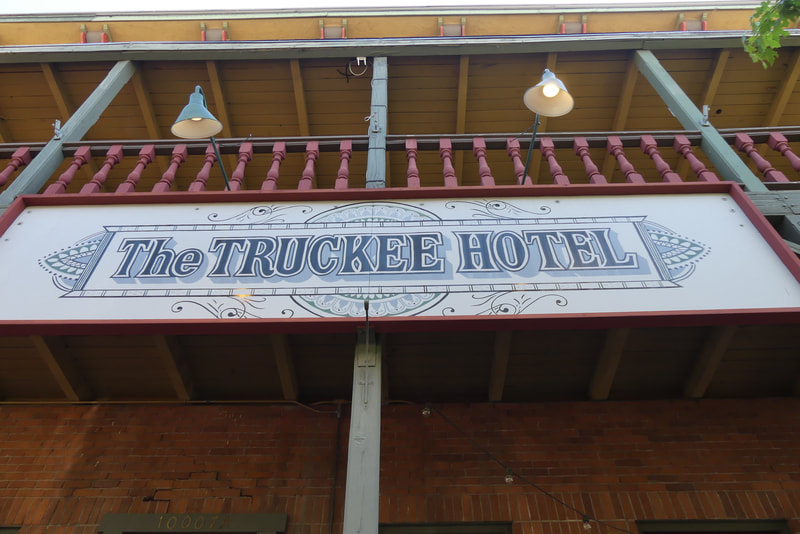 Judy DePuy is a member of Truckee-Donner Historical Society and on the board for the Truckee Donner Railroad Society and Museum of Truckee History. She resides in Tahoe Donner with her husband, Dave, and their dog, Morticia