These Boots are Made for Walkin'

I’ve been virtually visiting downtown Truckee lately.  As the COVID-19 pandemic and restrictions continue, I miss walking downtown. Luckily, the Tahoetopia.com webcam mounted on the Truckee Hotel - sponsored by the Truckee Hotel and Moody’s Bistro & Lounge - provide a great view of east and west Commercial Row, the railroad tracks and the station.

The sidewalk has really captured my attention in the last few weeks. Even with the pandemic’s shelter-in-place rules, the sidewalk has been an active place with installation of a new curb a few weeks ago. Outdoor diners now enjoy meals under canopies in the parking spots since indoor dining is not allowed yet in most counties in the state. The dining tents remind me of the early towns in the Old West - even Truckee - that started out as tents and a few board sidewalks. The covered sidewalk sections on Commercial Row do in fact give Truckee a lot of its charm, attraction and a direct connection to the Wild West. When I walk under the covered sidewalks it makes me think of what Truckee must have been like 100 years ago. 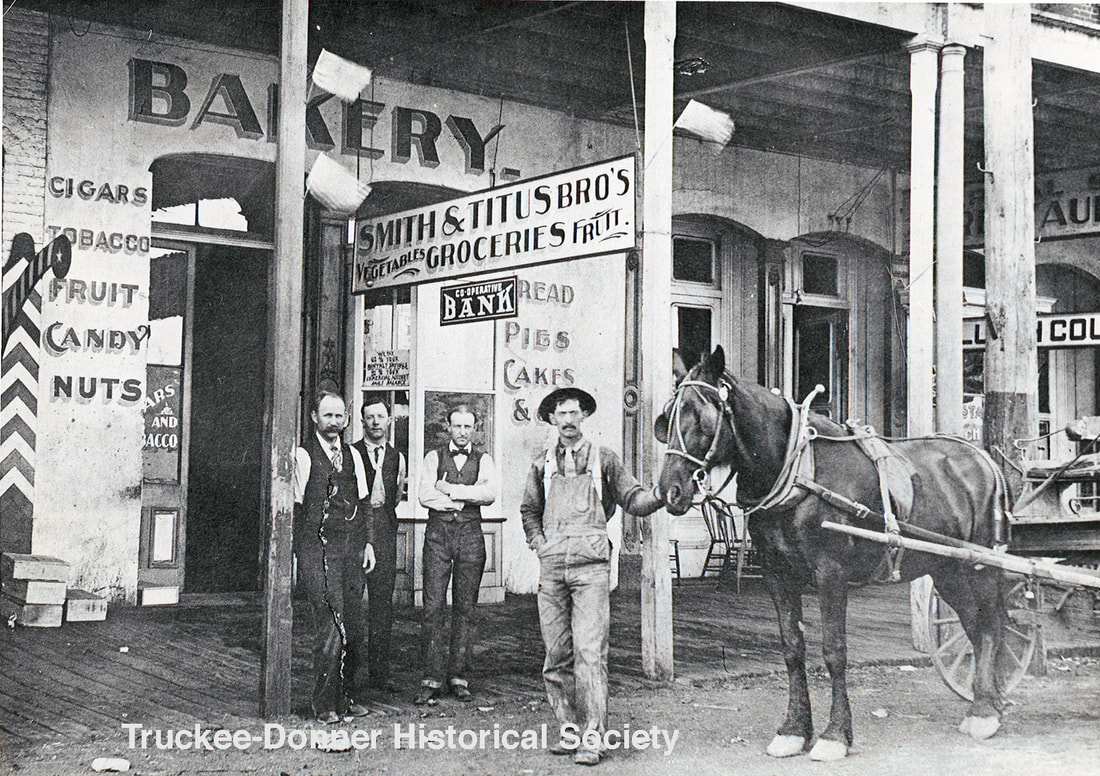 A view of wooden sidewalks in downtown Truckee, August 1907: Smith and Titus Bros Store front, facing north. FTS0014; http://images.truckeehistory.org/FrontStreet/FTS0014_small.jpg.
On Commercial Row, the sidewalk was made of wooden planks. Those are gone now and the cement sidewalks, in some cases is most certainly becoming part of Truckee history as well. As silly as it sounds, I start wondering, how old is the cement? Much of the sidewalk on Commercial Row has been replaced with interlocking paving stones, but sometimes, you can find older cement. In many communities, you can find a date stamped in the cement that indicates the year it was poured. (The oldest I’ve found in my hometown of Santa Clara is 1911). Unfortunately, that’s not the case for Commercial Row. There are no dates to be found in the cement as members of the Truckee-Donner Historical Society have recently verified after a search. So, when did Truckee lose the wooden sidewalks and a bit of its Wild West originality?

A new sidewalk was front page news in on Aug 8, 1908 (8/8/08) with a headline proclaiming, “CEMENT SIDEWALK BEING LAID” and a subtitle claiming that “In a Short Time the Whole of Front Street Will be One Solid Walk of Concrete.” The sidewalk that made front page news was to be installed in front of “Kirchner’s Arcade, Smith’s barber shop, Elite theater and the Wilkie Grocery Store.” It was being put in place by John Sherritt and there were plans to extend it to the Sherritt House. The Sherritt House was at the corner of what was then Front Street and what is still Bridge Street across the street from Truckee Hotel and where the current Bar of America is located at 10040 Donner Pass Rd. Oddly, the webcam mounted to the Truckee Hotel offers a great view of this same street corner. It’s difficult to tell in this picture from 1905, but it appears that this section of the sidewalk was still wooden boards. 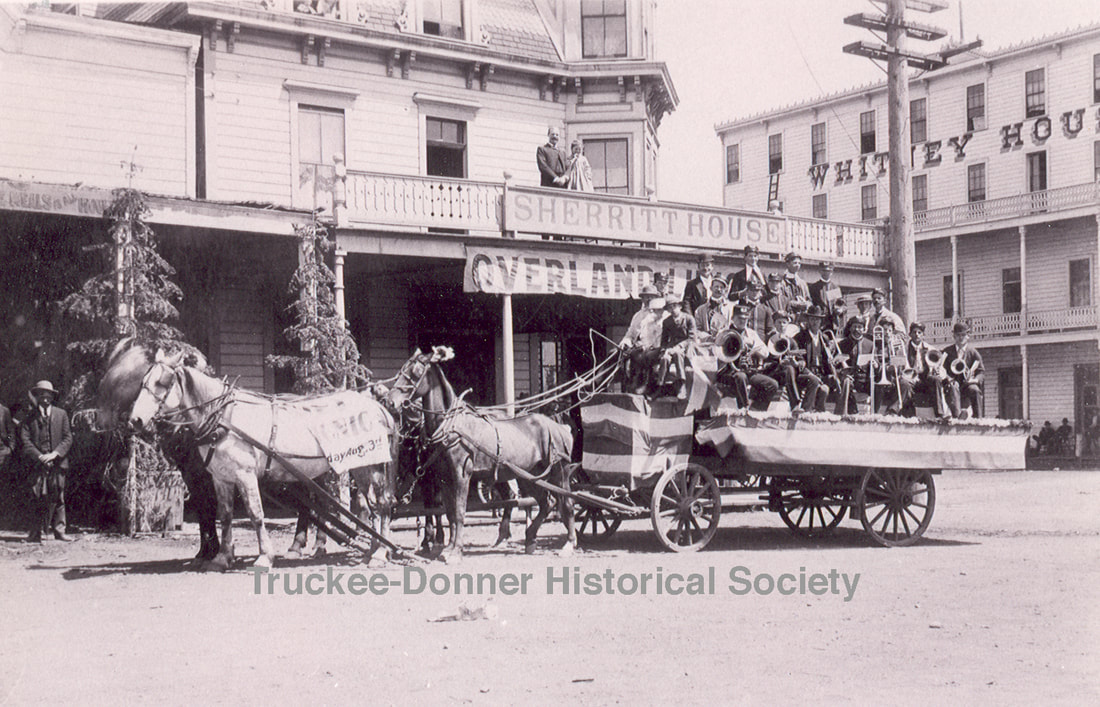 The Sherritt House in 1905 on the corner of Front St. and Bridge Street. This would have been one of the first locations to receive a cement sidewalk. FTS0061; http://the2nomads.org/TDHS/fullRecord.php?id=FTS0061.

A picture from July 4, 1908, just a month before the article was written, shows Wilkie Grocery just to the right of the Eagle Saloon and in the far right, the Sherritt House. This view helps us identify exactly where the sidewalks were to be upgraded to cement. FTS0040; http://the2nomads.org/TDHS/FrontStreet/FTS0040_small.jpg.
Upgrading from wooden sidewalks to cement soon caught on. Just 10 days later, on Aug 19, 1908, The Truckee Republican reports that “R. Thomas Ferguson decided a new cement sidewalk would be the rightest thing possible and he immediately proceeded forthwith.” I’m assuming it means that he too had removed his wooden sidewalk in front of his “Reception building.” The reporter seems to encourage others asking, “Now who will be the next progressive business man?”

A month before the first report of a cement sidewalk on Front St., The Truckee Republican reported that D. J. Smith intended to “build a concrete sidewalk all along his property on Bridge St.” The Glendale house on Bridge Street appears to have been just behind the Sherritt House and located just next to or on the current post office property. I have to wonder if D. J. Smith and Sherritt were having a “Battle of the Cement Sidewalks” right in downtown Truckee.

They may have been the trend setters of their day, similar to the first Tesla owners in your neighborhood today, for they appear to have cemented themselves into Truckee history with their sidewalks. Sixth months after reports of their sidewalks on January 9, 1909, The Truckee Republican continued to report solid news that “Cement sidewalk building continues to be the rage and several more business houses tear up their wooden ones.” 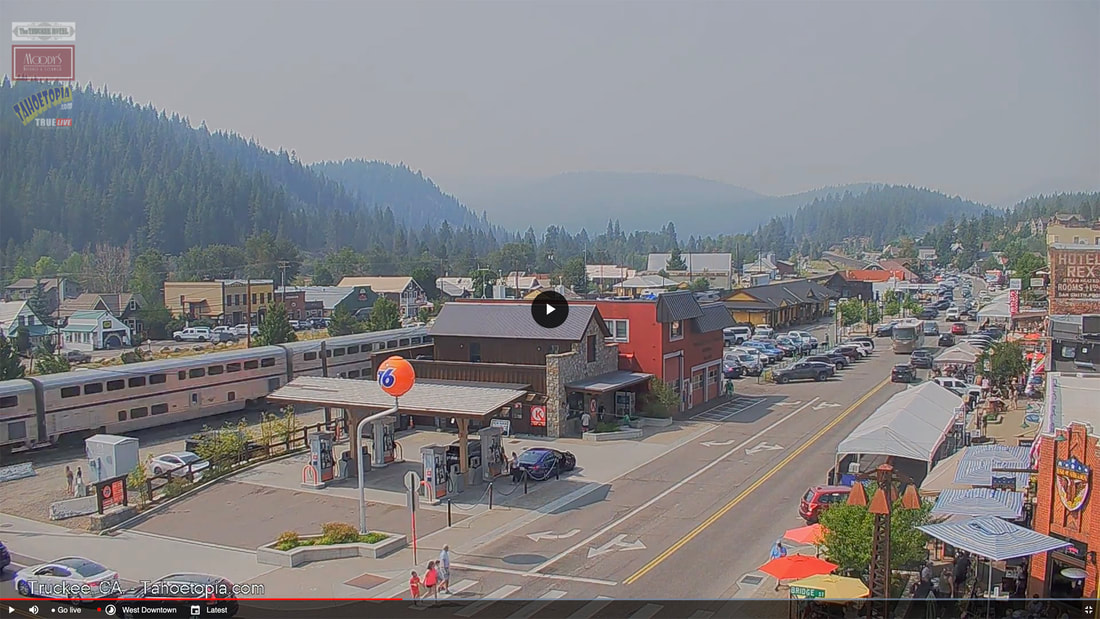 A view from the Tahoetopia.com Truckee Webcam Aug. 30, 2020.
Later, on September 25, 1909, The Truckee Republican reports that the Masonic Temple began building a third story and that workers have “started to lay the cement sidewalk in front of the building.” 84 years later, The Masonic Temple was mostly destroyed by a gas explosion in 1993. It was located at what is now 10118 Donner Pass Road to the west of the Sierra Tavern. It stood at the other end of the block from the Sherritt House, so one can imagine that within a year and a half from the first reports of cement sidewalks, wooden sidewalks were all but gone from this block. A stone arch from the old building is now located in the Memorial Garden of the Truckee-Donner Historical Society Old Jail and Museum. Nothing appears to remain of the old cement sidewalk, however.

The replacement of wooden walkways to cement sidewalks does rob Truckee of some of its charm, but if you’ve been anywhere that still has wooden sidewalks, you know what a hazard they can be. Old Town in Sacramento and Virginia City in Nevada do a great job of maintaining blocks of covered wooden sidewalks, but the climate in Truckee causes wood to rot in the winter and to dry out almost completely in the summer. The city of Temecula replaced twenty year-old wooden sidewalks in their old town area with cement just last year for many reasons, including that it was “expensive to maintain, [and] lawsuits have been filed by people who have tripped on it. Many planks are uneven. Bolts stick up above the wood. There are cracks between planks. And some of the wood has splintered.”  Our early sidewalk pioneers knew that cement sidewalks significantly reduce the risk of fire and require far less maintenance.

The next time you walk down Commercial Row, think of how it might have sounded as you picked your way down the wooden sidewalk. Now imagine pushing a stroller or wearing sandals or flip-flops on a wooden sidewalk and you can see what a dramatic improvement cement sidewalks would have been in 1908. Who knew that the sidewalks we all take for granted have such a solid history?