Have you noticed the checkerboard effect on the Tahoe National Forest map? It is the result of one of the most important, effective and little-known aspects of the building of the Transcontinental Railroad.
Before his Presidency, Abraham Lincoln had been an attorney practicing law for railroads. He represented the Chicago and Rock Island Railroad when it built the first railroad bridge across the Mississippi River in the early 1850’s, and consequently had considerable knowledge of railroading’s ability to move large amounts of passengers and freight. As President, he signed the Pacific Railroad Act of 1862, which provided major U.S. government incentives for building the first transcontinental railroad line. Both government bonds and land grants were offered. This was the first time the government had offered land grants directly to corporations.
Section 2 of the Act granted each Company contiguous rights-of-way for their rail lines as well as all public lands within 100 feet on either side of the track. Section 3 granted an additional 10 square miles of public land for every mile of grade except where railroads ran through cities or crossed rivers. This allotment was specified as “five alternate sections per mile on each side of said railroad, on the line thereof, and within the limits of ten miles on each side.“ A “section” is one square mile, so the 10 sections per mile gave the Central Pacific 6,400 acres for each mile of railroad built, allocated in the checker-board pattern we still see on Forest Service maps. In 1864 the Act was modified to increase the grants. From 1850 to 1871, the railroads received more than 175 million acres of public land – an area more than one tenth of the whole United States, and larger in area than Texas!
Railroad expansion provided new avenues of migration into the American interior. In some areas, the railroads were able to sell portions of their land to arriving settlers at a handsome profit. Lands closest to the tracks drew the highest prices, because farmers and ranchers wanted to locate near railway stations.
​
In the Truckee/Donner Summit area, most of the railroad land was mountainous and heavily forested. Sections with accessible timber were sold to logging operations such as the Sierra Nevada Wood & Lumber Company, which was based about 6 miles north of Truckee in Hobart Mills. Logging on railroad lands was especially profitable because the railroad also provided ready access to distant markets.
In 1905, President Theodore Roosevelt created the Yuba Forest Preserve and greatly enlarged the existing Tahoe Forest Preserve, encompassing most of the remaining federal land in the Donner Summit checkerboard. In 1906, the two preserves were combined to form the Tahoe National Forest, and in 1910, portions of the Tahoe National Forest were reallocated to the new El Dorado and Toiyabe national forests.
Once the lumber companies had harvested the wood, they in many cases donated the cutover sections to the national forest to avoid paying property taxes on the now-unproductive land. That is why there is more contiguous national forest in the heavily logged area north of Truckee, while the checkerboard pattern remains intact in the more rugged, more sparsely forested land along the Sierra crest.
Today, we understand that checkerboard ownership has fragmented wild areas, increasing the risk of environmental destruction through development and wildfires, and blocking wildlife migration corridors. In recent years, the Truckee Donner Land Trust has acquired many of these checkerboard inholdings, preserved them from future development, and opened them for low-impact public recreation. Frog Lake and Carpenter Valley, both recent acquisitions of the Trust, were originally railroad land grants that were purchased by wealthy businessmen and used for many decades as private retreats for family and friends.
​
Nelson Van Gundy is co-founder and historian for the Truckee Donner Railroad Society and 40+ year resident of Truckee. He is also a longtime garden railroader. Daniel Cobb is a railroad modeler, amateur historian, and volunteer with the Truckee Donner Railroad Society and an avid historian of our railroad history. He lives in Tahoe Vista. 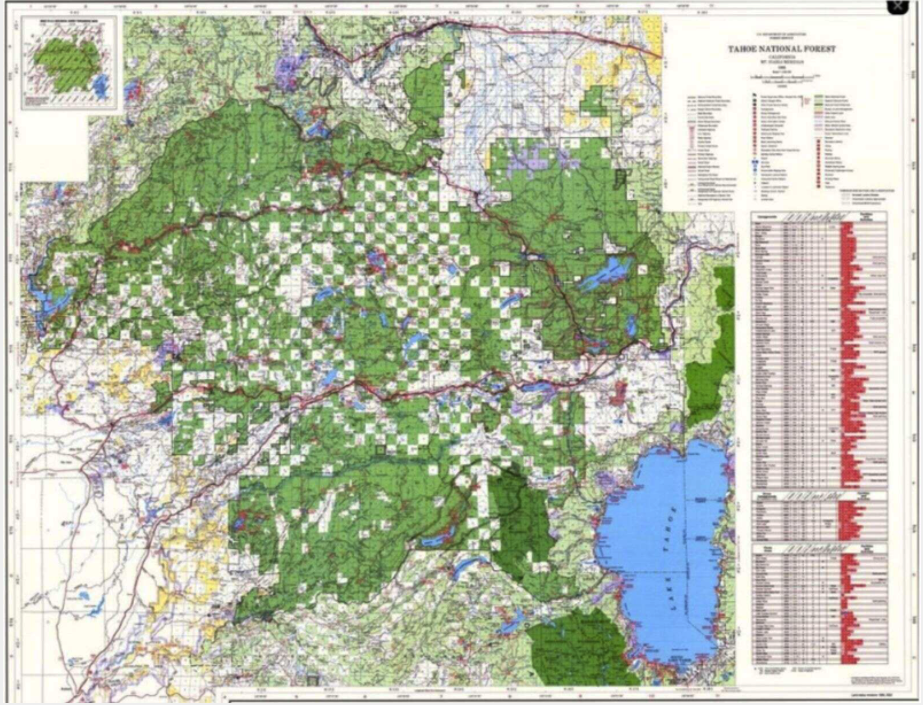 Railroad expansion provided new avenues of migration into the American interior. In some areas, the railroads were able to sell portions of their land to arriving settlers at a handsome profit. Lands closest to the tracks drew the highest prices, because farmers and ranchers wanted to locate near railway stations. U.S. Forest Service Forest Visitor Map for Tahoe National Forest
This article appeared in the Sierra Sun on October 22, 2021, and is available at this link.
HCS 10/26/2021