Above photos courtesy of Jaclyn Sproat; used with Workday permission 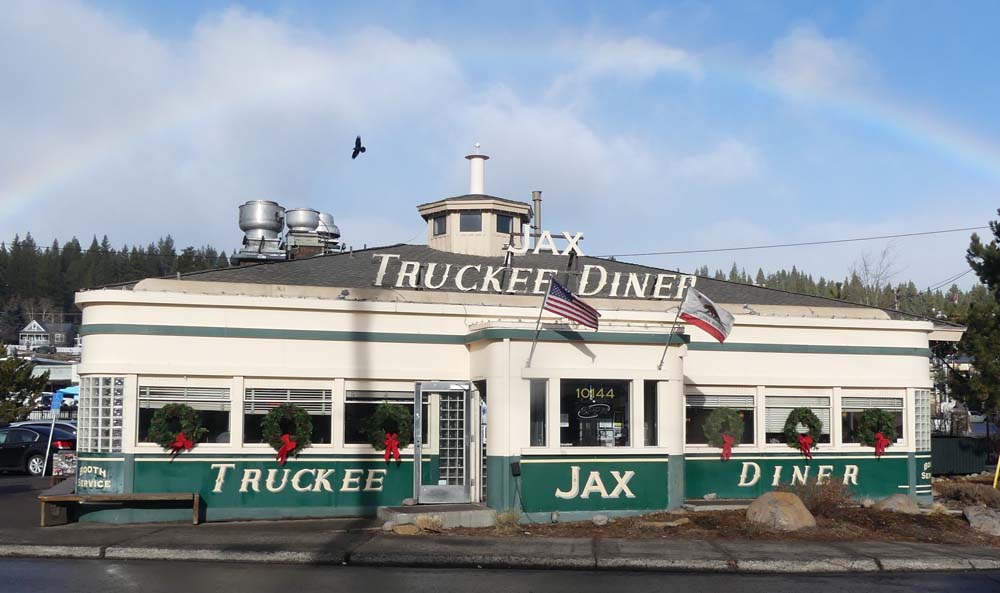 Truckee Diner, Jax on the Tracks; photo courtesy of Greg Zirbel, New Years 2020 (note the rainbow)
It’s a small world, and technology certainly has shrunk distance and time.  Serendipity strikes. Stay with me here.
Living in Truckee for almost 20 years you get to see businesses come and go.  But there was something very unusual about one particular business that kept gnawing at my memory banks:  Jax on the Tracks, formerly Andy’s Diner, formerly the Birmingham Grille.  Huh?
Jax on the Tracks is a diner in Truckee.  It was moved here from Chester County, Pennsylvania, in 1995.  I lived in Chester County for almost 30 years, ate at the diner when it was there, and when I saw the diner here I did a “double-take”.  I thought I was imagining things until I went to the back of the diner in early 2000s and there was a wall map display showing the route the diner took across the country – winding up of all places, here in Truckee.  So I wasn’t crazy.
Let’s start with a couple of facts:
•    The stainless steel 880 square foot Built in Streamline Moderne diner was built in 1948 by the Kullman Dining Car Company in Newark, New Jersey for shipment to West Chester, Pennsylvania.  It operated there as the Birmingham Grille until 1991 when the Carey family purchased it for relocation.  To Truckee.  Why Truckee?  The Carey family was familiar with the area as they held property locally since the 1970s. Restaurant developer Carey believed having an “Americana” fixture would bridge railroad history with the “diner” era.
•    As the diner was hauled all the way across the country, it encountered several very difficult sections where a few local governments prohibited transporting such large, heavy objects.  For a while it sat in the PennDOT Equipment Yard, requiring new permits for a “super load” due to its girth and weight – which required a police escort.  Great.
•    The hauling company that transported the diner from Pennsylvania to Truckee had experience hauling huge objects – like NASA’s space shuttle to California.
•    The diner arrived on July 26, 1995, but not without some issues negotiating the curves on Donner Pass Road and West River Street.
•    The diner was appended to a newly designed 2,880+ square foot restaurant addition, planned to resemble Truckee’s old railroad roundhouse.
•    No other diner of its size has ever been ‘trucked’ (no pun intended) across the continent.  The Diner still holds the record for the longest distance moved.
•    The diner opened here December 7, 1995 at 10144 West River Street where it still operates.  Rumor has it, however, that it is up for sale.

Ready? Here’s the serendipitous part.
•    Peter Gerdin was the architect on the entire Truckee Diner relocation project, from Pennsylvania to Truckee.  I didn’t know this until I read a 1994 article about moving the Diner when I was browsing through the Sierra Sun bound volumes which Truckee-Donner Historical Society thankfully rescued which had been destined for the garbage bin. That’s another story to read about here.
•    Peter Gerdin designed our Truckee home.
•    At a December family dinner in 2022 on the other side of the country, daughter-in-law shows me photos of a gingerbread house competition at her company’s headquarters, Workday.  The “house” is Jax on the Tracks?  What?  No way.  Why would her company have a gingerbread house of Truckee’s Diner?
•    I learned that in 2005, the founders of Workday met at Jax on the Tracks diner and formed a startup – one that would sell cloud-based applications for finance and human resources.  Creative entrepreneurial vibes clearly at work.

So you never know how “technology” might just bring Truckee’s past history to light.  Browsing through old Sierra Sun volumes, several Jax on the Tracks articles caught my eye.  So next time you’re downtown, take a second look at the “old” renovated diner and see the similarity with the Truckee roundhouse of old.  I’ll bet you’d smile. 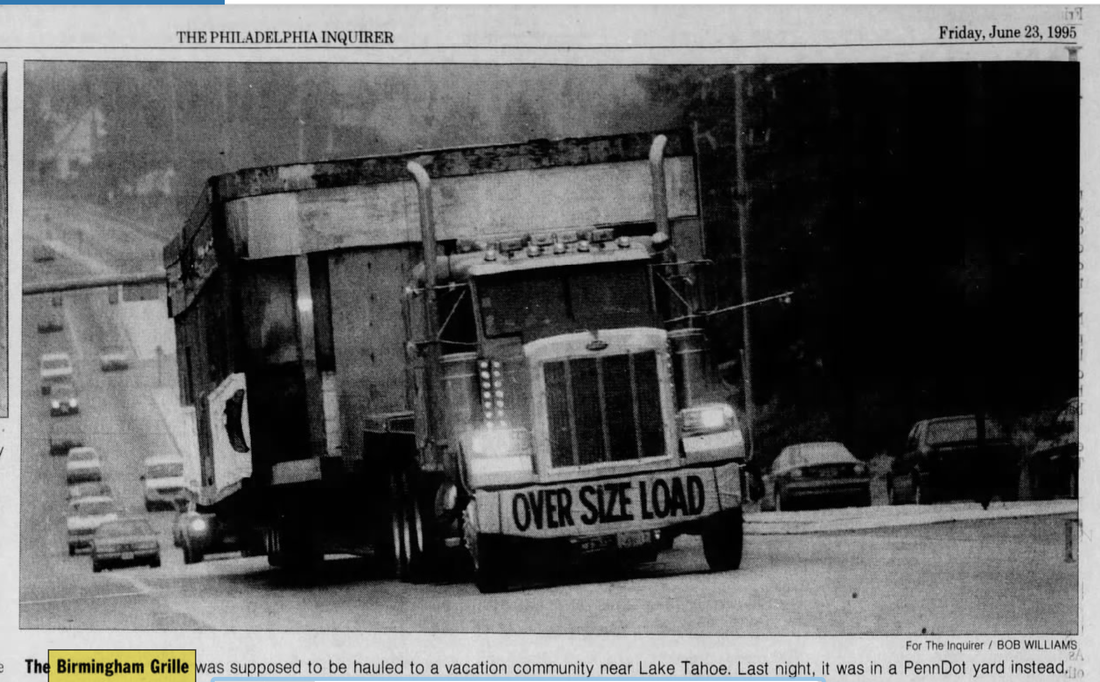 The Birmingham Grille being transported to Truckee from West Chester, Pennsylvania The Philadelphia Inquirer, June 23, 1995; courtesy of Bob Williams 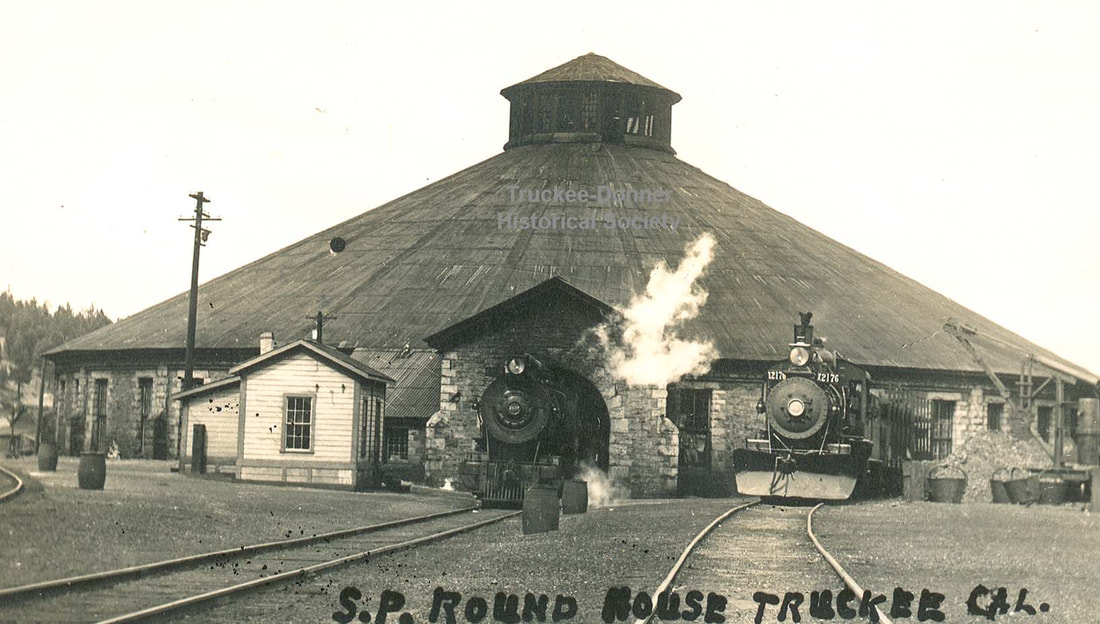