Flumes of Truckee: Using the Power of the Sierras
By Judy DePuy *

Driving down Interstate 80 from Truckee to Reno I’ve often wondered about the wooden boxes that hug the road and Truckee River. Some look abandoned while others look like they are still being used. What I found is that these are “flumes” and have been here for over 100 years. But what were they used for?

Flumes have been used around Truckee for many purposes. Early on ‘V-flumes’ were used as a replacement for oxen, horse and mule power, and “donkey steam” engines to transport logs to the various mills found on the Truckee River, Alder Creek and Trout Creek. Flumes were also used to transport lumber, ice and wood cords. But one of the most important usages of flumes had to do with providing power to where it was needed most.

The flumes you see along Interstate 80 are box flumes used to transport water and are part of a vast hydroelectric system. ​ 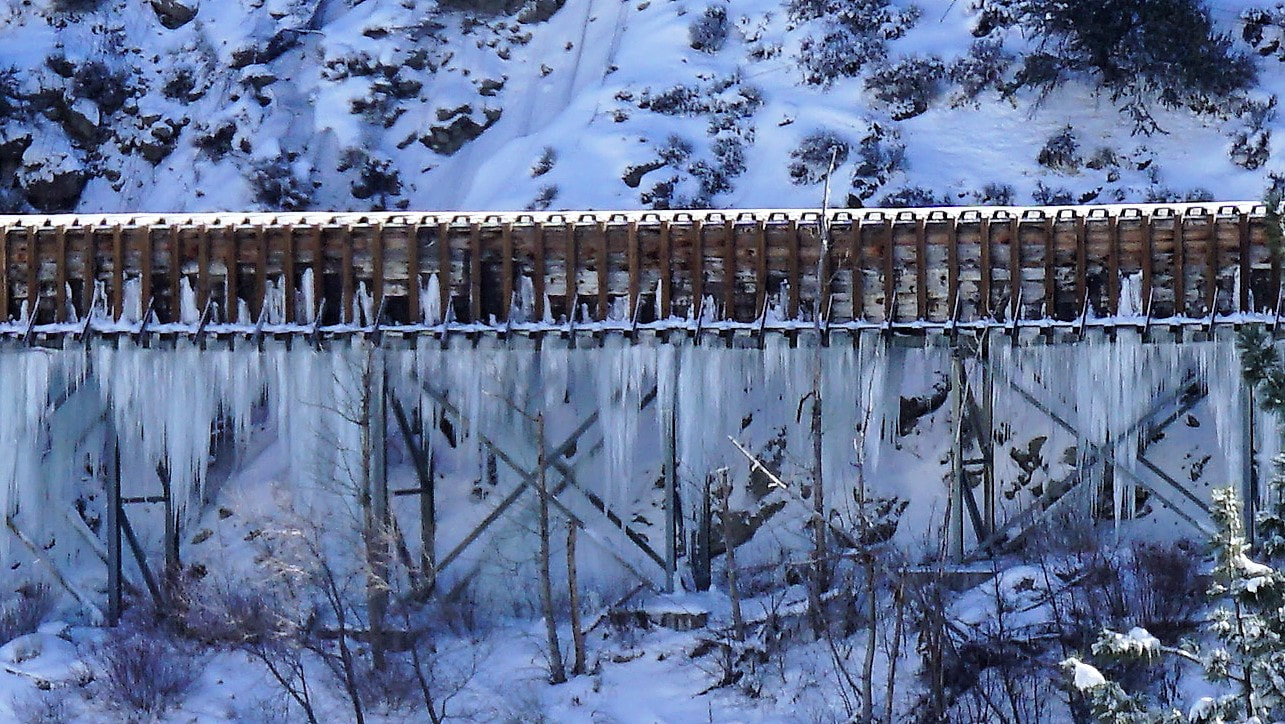 Even a hundred years ago the need for affordable electric power was apparent. The finding of the great Comstock Lode in Virginia City helped fuel the decision to cross over 40 miles of rugged desert to bring electricity to the mining operations. With mining being Nevada’s primary industry in the late 1800’s, the installation of hydroelectric power was critical to the Silver State’s economy.

The Virginia City mines needed this electric power desperately. The reason for the hydroelectric plants was to replace expensive, soot-producing coal and wood power. By the late 1800s, Virginia City mines were so deep that they required constant pumping to remove groundwater. Heat also plagued the mines. The deeper into the earth the mines went, the hotter they became. In some cases the air temperature would be 150°F with the water reaching 170°F. Steam-driven Cornish pumps were effective for a while but the expense of the electricity and drop in value of silver forced mine owners to find cheaper power alternatives.

The first hydroelectric plant between Truckee and Reno was built at Farad in 1899. It had 2 turbines and generators and could supply 2800 KW (KiloWatts) to the mining companies and town of Virginia City. At Floriston a ‘diversion’ dam was built and Truckee River water was diverted into a canal and flume system which created the ‘headpond’. The headpond fed into the penstock pipes (pressurized round wooden pipes with metal bands) and into the generating station. The height of the pipe above the turbines and the flow of water in the pipe provide the force necessary to turn the turbines. The greater the fall and flow of water, the more electricity could be produced.  The steep sides of the Truckee River canyon made it necessary to build a flume (of 2-inch thick native pine for nearly 2 miles), set on supports that clung to the walls of the canyon. (See sidebar on ‘Seeing the Flume’). Power was first delivered to Virginia City from the Farad hydroelectric plant on September 12, 1900.

Flumes were built on the edge of cliffs or high in the air on a trestle. Farad’s highest flume was 36 feet off the ground. Box flumes were very different from the ‘V’ flumes for the logging industry. Box flumes were enclosed. The box flumes had ‘racks’ which would help keep debris and ice from going into the Powerhouse.

On the top of the box flume were boards creating a 12” walkway. Constant repairs required a two-man crew to work on the flume. One would be on the top on the walkway to hand over needed equipment. The other person doing the repairs was on a 12 inch wide ‘sill’ on the side of the flume. Before any repairs were done there was a painstaking analysis and physical walkthrough of the flume to see where maintenance was needed. Wood flumes are replaced approximately every 20 to 40 years. Replacing a section was and continues to be an interesting task.

Historically they would send in a flume crew and have them manually take down the section of flume that needed replacement. In the most dangerous areas and in long sections, environmental requirements had them use explosives. Explosives worked for several reasons: 1) you could take down the section you needed to replace quickly, and 2) the material would fall in place and not into the river. Environmentalists were adamant that no “unnatural treated wood or contaminants” fall into the river.

Regular maintenance also entailed dealing with ice build-up on the flumes. In the winter there is still a flume crew who would approximately come in every two weeks to knock the ice off both the inside and outside of the flume (see photo of exterior ice build-up).

Walt Walker managed the flume crew at each of the hydroelectric plants built by Sierra Pacific Power Company. He started as a laborer, in 1942, earning $0.93/hour. On his first day on the job he was told to climb a ladder and caulk the leaks on the bottom of the flume. His supervisor was testing him to see how he did with heights. Walt also remembers the hard winter of 1947 when he started working on November 15 through March 15 with no days off, working 10 hours per day, fighting the ice in and on the flumes.

Early on, many of the hydroelectric fulltime workers lived at the hydroelectric plants with 4 people assigned to each powerhouse. At the site were several rooming houses. His dad, Wesley Walker Sr., was an operator and foreman on the crew at Farad. Walt’s family lived in the Farad company housing with Walt Walker’s brother being born there. Later technology took hold and the plants were automated leading Walt to go from operations to, once again, supervising the flume team.

Drama Along the Flumes

Over the 100 years there have been many stories about the flumes.

Around 1958-1959 there were 43 boxes (512’ of flume with each box being 12’ long) that fell all at once at the Farad flume near the head. There was talk of sabotage but nothing was found. Farad also had issues with boulders coming down and damaging the flume. Over a 3 week period they blasted the hill above the flume to reduce the rock fall.

And there was the one person in the 1980’s who wanted to ride the top of the flumes on his bike (with his dog) only to fall 35 feet. He lived but not without injuries. His civil suit was dropped when it was pointed out that he was riding beyond the “No Trespassing” signs. Needless to say fencing and more signs were added.

The Farad Hydroelectric plant continued operations until a major high flood in 1989 irreparably damaged the diversion dam. Farad has been closed for over 30 years due to the costs of rebuilding and the low cost of wholesale electricity but can still be seen from Interstate 80.

Upriver from the operational Fleish Plant (south side of Interstate 80) you can see the flumes coming into a solid granite tunnel. The tunnel was built in 2005 due to the numerous times the flume was washed out or damaged at the sharp bend of the river. The old flume location is still visible. Just past the tunnel the flume continues. Then as you enter Nevada you will see the spillway off the flume, before the power plant, to handle the overflow and any unneeded water.

Verdi and Washoe hydroelectric plants use both flumes and open canals to carry water. All three plants are still providing cheap, reliable electricity to TMWA customers.

The great part of hydroelectricity is that it uses a renewable resource and all the water goes back to the river. Flumes were an important part of building the West.

Learn more about the history of Truckee and how important this town has been to the opening of the West.
https://www.truckeehistory.org/