Eder: Fire, Ice and Romance
By Thomas Viano
Eder sits high above Donner Lake. At least according to Google Maps it does. Other maps include Eder as well. However, barely a remnant exists from this vital hub of activity. As I’ve uncovered information about Eder, it’s clear that it is a vital part of Truckee history and humanity. Eder has a long history of derailments, avalanches, injuries, arson, death and romance.
had a few displays about the railroad and the struggle across the summit. One display showed a cutaway of how the famous summit tunnel was constructed with a little locomotive model sitting in the middle the tunnel. (See image below).  Eder would have been the first station after exiting the tunnel for trains heading east to Truckee. The manpower needed to make inches of progress a day through the summit’s solid granite impressed me greatly. One summer, the movie shown in the museum featured a Southern Pacific film called “Snow on the Run” that chronicled the struggles of keeping the railroad line open during winter and the famous snow bound train, the City of San Francisco. We must have seen that film 5 or 6 times in the space of the two weeks we were there that year. The film ends with a train rolling through snowed-in Truckee and crews lining the tracks ready to get back to work with their shovels.
I find it remarkable that the museum dedicated so much space and time to the railroad, especially when the plight of the Donner Party seemed to be so much more important. With so much attention given to the railroad in the museum, I always found myself gazing up to the tracks and snow sheds any time I was on the beach or in the water or, when I was older, driving on Donner Pass Road. Later, adventures with my brothers up the ridge and to the tracks revealed gleaming rails that hugged ridges and disappeared into tunnels and snow sheds. But that was all. We had been expecting more. In our preparations, we reviewed real paper maps from the USGS and Forestry Service and found what appeared to be a settlement called Eder sitting high above the lake. The maps we had even indicated that some buildings might still exist. But with all of our spying with binoculars, we never saw any activity other than trains rolling up and down the summit and, due to where Eder is, you really can’t see it from lake level. So, armed with our maps, we hiked up an old dirt road to Eder and we discovered absolutely nothing. It was a desolate and quiet place. There was no settlement. There were no buildings. We wondered, did Eder ever exist or were our maps incorrect?

Eder did indeed exist. It was still listed as “a populated place” in 1985 by the US Census. However, other than being marked on a few maps, information about Eder is difficult to find. Photos or even paintings of it are near impossible to locate. However, with the help of some knowledgeable rail fans, I may have recently uncovered the only image of the structures at Eder from a photo archive at the University of Missouri at St. Louis.

Photo Credit: John W. Barriger III photo. Barriger National Railroad Library at UMSL. Most likely from sometime in the 1930’s.
Eder was a railroad waystation. It sat at what was a critical switch point for the Central Pacific and then later the Southern Pacific railroads. A small railroad crew or section team was stationed there to service switches, signals and track. They had their work cut out for them. The Truckee Republican newspaper frequently reports on many activities at Eder. In one story, Eder is called a “small station.” If Eder was considered small by standards of the day, that may help explain why information about Eder is so hard to find. Other articles mention mail service to Eder and a number of Truckee residents coming from and going to Eder to visit residents or to go camping.
Derailments, while unwelcome, were common at Eder and most likely other high Sierra railroad stations. One of the earliest derailments reported in the Truckee Republican occurred in September of 1904. A passenger train heading to Truckee rolled over a section of broken rail. The cause of the incident was considered mysterious and it was hailed as a “Miraculous Escape from Serious Accident,” noting that it was a miracle that the train and passengers didn’t tumble down the mountain. Crews stationed at Eder repaired the rail and the train was on its way in three hours. 1  One derailment in August of 1907 was important enough that news of incident was included on the first page of the Truckee Republican. Trains were delayed for 5 hours. Crews and equipment were sent up from Truckee to repair hundreds of feet of ruined track and to clear many ruined train cars.

Another derailment at Eder on March 12, 1914 again required crews from Truckee to fix it. This time, Eder is included in the article title. As with many of the stories about derailments, this one was also cleaned up after a few hours, but it does note that even though train cars and snow sheds were damaged, hardly any of the freight on board was ruined. There’s no mention of what the freight was. 2

Avalanches were common and least three major avalanches destroyed hundreds of feet of wooden snow sheds. In 1908, three men were killed in an avalanche that swept them down into the lake below. The section of track from the tunnels above the east end of Donner Lake to Eder was so dangerous that it was referred to as “Hell’s Mile.” In this same section in 1936, a massive snow storm and avalanche destroyed a train, snow shed and injured passengers. 3

Injuries were common at Eder. Railroad employees were frequently injured, in one case by falling off a helper locomotive called an “engine caboose.” 4  In another incident, when rescuing an employee injured by falling rock at Summit, another railroad employee, a brake man, fainted and fell from the locomotive and was unconscious upon arrival in Truckee. 5

In June of 1911, two men were arrested at Eder for starting a fire with railroad ties near the snow sheds. They were brought to Truckee and most likely spent time in the Truckee Jail. 6  Again in June, but now in 1920, a massive snow shed fire burned for hours and delayed trains in both directions for nearly a day. Fire trains were sent from Truckee and Summit to battle the flames. The Truckee Republican estimates that the fire caused $200,000.00 worth of damage. That’s 2.5 million in 2020 dollars! 7

Eder has a dark and unfortunate history too. In December of 1912, one poor unnamed soul who had been known to play the piano in Truckee in “several of the saloons” fell from one train and was hit by another.  Nobody knew his name “as he made no friends.” 8  In another disturbing report from 1909, J.E. Darling, a painter from Truckee, “was found dead with a bullet hole in the head” near Eder. 9

In looking into Eder, I found that a woman, Miss Della West, worked as a block operator at Eder. I find it amazing that a woman in 1913 would be working in a somewhat isolated location. The Truckee Republican frequently reports about her coming and going up and down the mountain to visit friends in Truckee and of friends visiting her at Eder. Finally, in February of 1914, she married Ira Hocker who was stationed just on the other side of the mountain at Summit. They were married in Reno and planned to live at Summit. 10 Below is an image of a woman telegrapher who is representative of Miss Della West's position.

Visiting Eder today requires some effort and there isn’t much to see besides railroad tracks, trees and brush. Other than the Union Pacific right-of-way Eder’s location now lies in the Donner Lake Memorial State Park property and you can visit the area. A 10 mile hike from the State Park parking lot makes for a good day of hiking to a place that now only exists on a map.

Do you have other stories or photos of Eder? Do you know how Eder got its name?  Let us know if you do.   Please email us at info@truckeehistory.org . 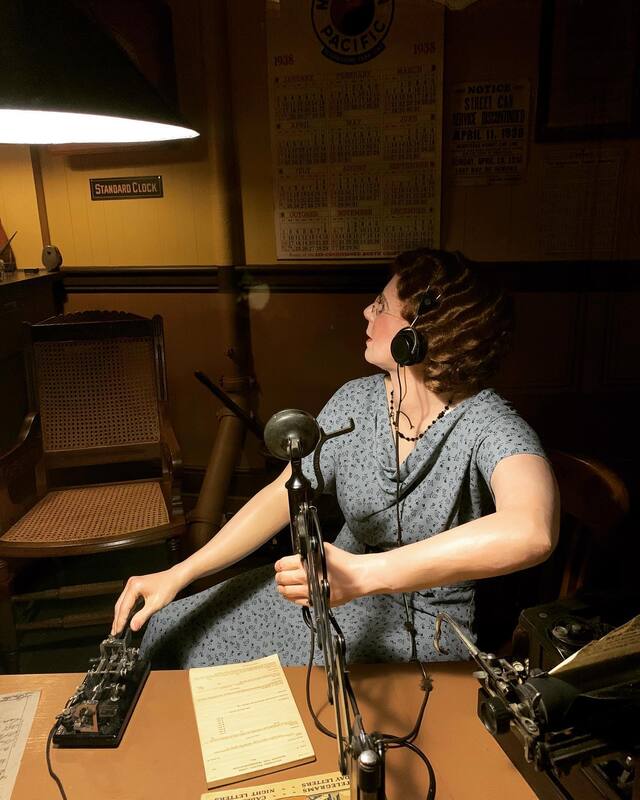 Thomas Viano is a Bay Area marketing director whose interest in Eder started as a young boy vacationing in the Truckee-Donner area.  The author originally contacted the TDHS inquiring about the site and whether any images exist and was invited to write an article on his findings for our readers. 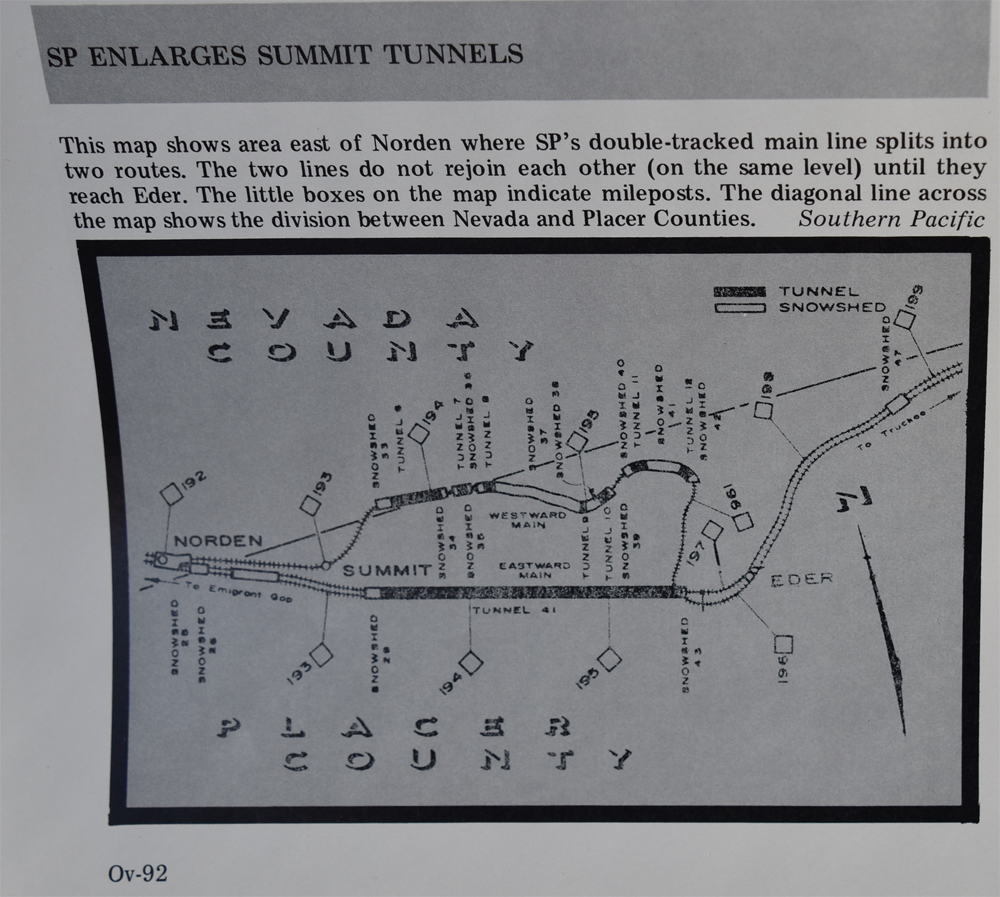