Now that we’re all stuck at home, and we’re trying to think up things we should and could be doing when we can, when it comes right down to it, why not just pretend you’re out exploring - instead of doing so online. So instead of cleaning out my closet, or organizing the kitchen cabinets, why not have some online educational fun.  But WHY would anyone want to do any research about some government program from the 1930s?

Ever heard of the Civilian Conservation Corps (CCC)?  Even if you haven’t, there are probably a dozen places you’ve been in California that were built, upgraded, or overhauled by the CCC “Boys”.  And even if you haven’t visited such an area, know that many of the fire-fighting programs in California have their genesis in the CCC efforts to quell Sierra Nevada fires in the 1930s – a possible forerunner to the Truckee Hotshots. 1

A Little Background
Most of us are familiar with the CCC as part of a New Deal program implemented by President Franklin D. Roosevelt in an effort to get the staggering number of unemployed young men engaged in meaningful, productive, employable work.  After the Great Depression, years of natural disasters, and very poor land management practices, FDR’s “Tree Army,'' the CCC, was conceived and approved by Congress in 1933.  Unmarried men between the ages of 18-25 whose family was on relief, could join the CCC for a six-month stint working in a CCC camp. Enrollees could re-up for a maximum of two years.  Most CCC camps had 200 enrollees.  Most of the work was hard physical labor, but as FDR said:

The overwhelming majority of unemployed Americans … would infinitely prefer to work.  We can take a vast army of these unemployed out into healthful surroundings.  We can eliminate to some extent at least the threat that enforced idleness brings to spiritual and moral stability.  March 21, 1933

While the CCC program was intended primarily to be a conservation program, the added bonus was that the camps curtailed the exploding unemployment rate among young capable men.  There was significant tree planting, construction of living units, buildings, water, sewer, and electrical systems, trail clearing and creation, road construction, fire prevention, brush clearing, and stone laying.  An added bonus the CCC provided was educational in that each enrollee received at least six hours of training a week.  Given the war raging in Europe, the CCC camp training was also preparedness – militarily.  Military drilling and specialized classes like welding were also offered to enrollees and in hindsight, proved invaluable in the war effort.

Here is a map of the CCC camps in the United States in 1938. 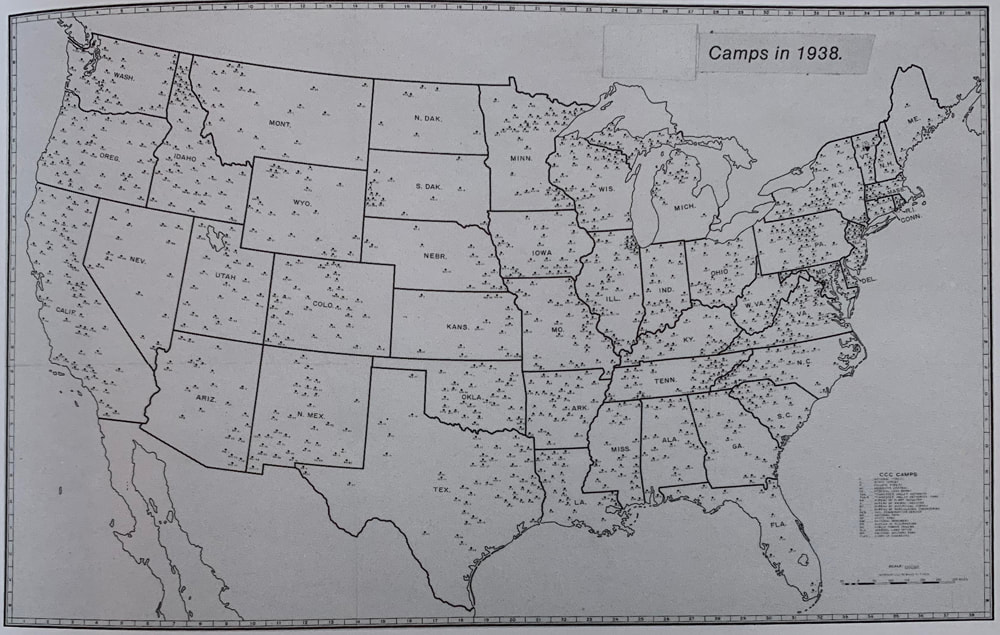 Fire Lookouts
Saddleback Fire Lookout is about 10 miles northwest of the town of Downieville.  Calpine Fire Lookout was built in 1934 by the CCC; another Pilot Peak, Plumas County.  Clearly, in the 1930s the CCC activity in forested areas was centered on fire prevention, fire-fighting, and fire-suppression.  I thought maybe the Sierra Buttes fire lookout was also constructed by the CCC, but learned after a site visit that it was erected some 15 years earlier, in 1915; BUT there is mention of a 1933 build (expansion) date.  Wonder if the CCC was also involved in this upgrade?  Sardine Peak lookout was also built by the CCC in 1934. 5  In fact, it was at one of these very kinds of lookouts that one of the first female fire rangers, Lane Endicott, served. (See this article for details. 6)  List of Fire Lookouts in California; Former Fire Lookout Sites Register. 7  In 2020, many of these fire lookouts can be rented through a national reservation system at Recreation.gov.
So in wanderings through fire lookouts, CCC sites, WPA (Works Progress Administration) sites, I hit the ball out of the park – locally so to speak.  Although the WPA supposedly completed projects in the Tahoe National Forest work area starting in 1936, the source reads as though the CCC was involved in forest improvement and development and the installation of a communication system (in 1936?), “Alder Creek to Crystal Peak, Nevada & Sierra Counties.” Details explain that workers cleared trees and brush of 61 acres of land adjacent to highways and roads. In this site is a corresponding map which purportedly shows work on Alder Creek Road! 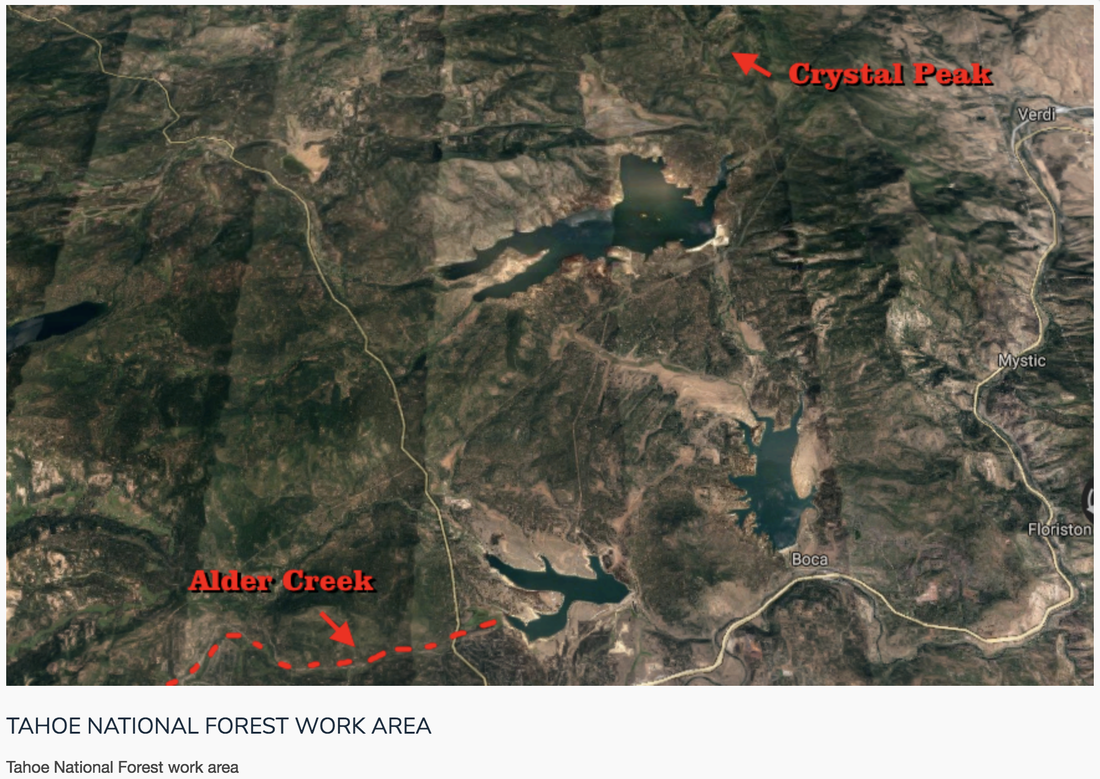 Source: https://livingnewdeal.org/projects/tahoe-national-forest-land-improvement-truckee-ca/; WPA Proj. No. 0200-785, $5,840, April 30, 1936; WPA job card, Fresno Public Library, San Joaquin Valley Heritage & Genealogy Center
In reviewing various articles for other research projects, I also came across these pertinent references to a CCC camp at Hobart Mills. Truckee, F-70 #503 6/26/1933 Truckee, F-396 Project #914, 8/16/1941 Truckee Hobert [sic] Mills 6 m. N, and Truckee F-399, Project #999, 6/18/1940, Truckee Hobart Mills 6 M. N.  [F signifies Forestry.] Yet this CCC legacy site still refers to several Truckee camps.  But specifically, where were they? Still researching.
Although a partial Truckee Republican (TR) newspaper collection currently resides at cdnc.ucr.edu, it unfortunately only goes until 1923.  When it was possible to do so, I made an in-person visit to view the old records about the CCC in the Truckee area.  To wit, an 1 April 1939 Madera Tribune article stated that there was to be a new CCC camp in Truckee, Nevada County.  And later, in an 29 April 1941 San Bernardino Sun article, the CCC camp was to be “reestablished” in Truckee. But trying to find definitive information about any CCC camps in the Truckee area has, to date, proved to be fleeting.
There were CCC camps involved in the construction of Boca Dam, but that occurred in the late 1930s.  When libraries were open, before the coronavirus upended all sorts of research plans, doing research on the CCC in the Frederick, MD area, I came upon several unique sources that assisted in my research.  One of those resources was the book The CCC In Nevada From Boys to Men.  Young CCC men at Boca cleared the future Boca reservoir site of willows, logs and debris.  They also repaired existing roads and realigned roads that would be inundated once Boca Reservoir was completed.

There were at least two Bureau of Reclamation sites, BR projects, BR-21 and BR-92 that were affiliated with the CCC.  Click on each image below to see a larger rendering.  The Truckee-Carson project was later renamed the Newlands Project.  (https://www.usbr.gov/projects/pdf.php?id=124) .  Camp Tahoe, BR-21, was located adjacent to Tahoe City, CA, on the shores of Lake Tahoe.  (See map below).  The CCC work force made repairs and structural improvements to the outlet gates at Lake Tahoe, cleared and cleaned the outlet channel and adjoining land.  They also worked at the Boca Dam site doing road construction and preliminary site work.

Map from https://data.fs.usda.gov/geodata/rastergateway/states-regions/states.php
Conclusion
So the next time you are out exploring Lake Tahoe, specifically just south of Tahoe City along the shoreline, see if there is any evidence that may still reflect one of the CCC ‘Boys Into Men’ projects.  Perhaps the piers.
There are dozens of additional articles about the Truckee area’s general CCC involvement, but nothing specific.  Any references are currently housed in the Sierra Sun Truckee Republican archives which, for the foreseeable future, are off limits. If you are aware of anyone who was involved with the CCC, or you have stories to tell about the CCC in the area around Truckee, please contact us by email at info@truckeehistory.org .
Notes
1 See Sierra Sun September 2019 article. Map of CCC camps in the US in 1938. https://www.sierrasun.com/news/fire/tahoe-national-forest-hotshot-crews-looking-for-recruits-for-2020-field-season/)

3 Frederick, MD excursion. A story for another time.